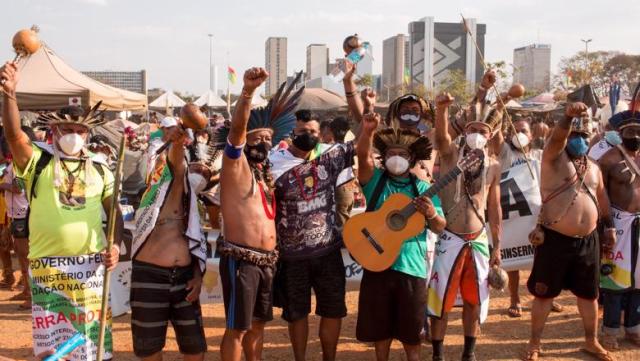 Land reserves occupied by indigenous groups in Brazil are at risk of being lost because of a constitutional decision that could affect hundreds of cases, warns Professor Anthony Pereira.

The case, which is sparking protests in Brasília, is over a federal regional court ruling that it would only recognise tribal lands occupied by native communities at the time Brazil’s constitution was ratified in 1988.

The Brazilian Supreme Court is now being asked to determine whether this was an excessively narrow interpretation of the constitution of October 1988, thereby infringing on indigenous rights.

Professor Pereira, of King’s Brazil Institute, said that there is much at stake around the upcoming ruling by the Supreme Court, although there is some evidence that it might not uphold the decision.

Speaking to France24, he said:

This ruling is going to have implications for hundreds of other cases involving indigenous people claiming the rights to traditional land, and trying to get reserves demarcated. A lot of the indigenous representatives that were there see this as an existential question. If the Supreme Court were to say “You have to prove that you were occupying land on or before the 5 October 1988”, which was when the constitution was ratified, they’ll see that as a huge setback to their struggle for cultural survival, and also environmental protection. So there’s a lot at stake with this decision by the Supreme Court.– Professor Anthony Pereira

The case has arisen in part because farmers, backed by President Bolsonaro, are lobbying for legal certainty of agricultural access, in a move that could reduce the amount of land in existing indigenous reserves and make it more difficult to demarcate new reserves.

The President believes that indigenous groups have too much land reserved for the amount of people using them.

Campaigners have warned that a loss in court could set a strong precedent for further degradation of native rights, and could see indigenous groups facing a huge struggle for their culture.

Environmental protection of the land could also be at risk, as deforestation generally happens at a much lower rate within indigenous reserves than it does outside them.” […]

More: Indigenous people in Brazil at risk of losing their right to land…

Director of Manchester School of Samba at http://www.sambaman.org.uk
View all posts by agogo22 →
This entry was posted in Brazil and tagged brazilian style, construction, Environment, Politics. Bookmark the permalink.