Artist Spends 10 Days Recreating the Sight of a Solar Eclipse 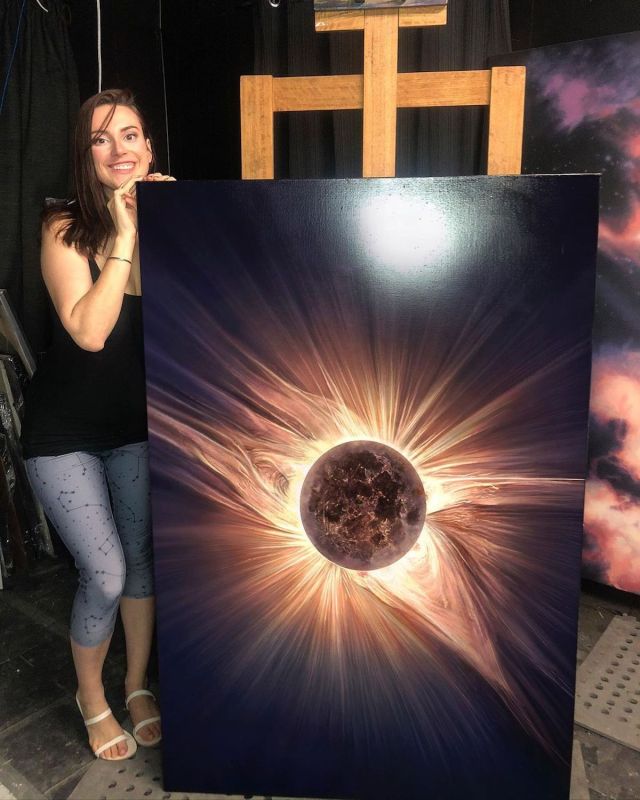 “I was awestruck by the intensity and the beauty of the corona.”

Artist and stargazer Cathrin Machin continues to capture the wonders of the night sky in a mix of traditional and digital paintings. One of her latest projects was based on an image of a solar eclipse, taken by astrophotographer Dr. Sebastian Voltmer in 2017. Machin spent about 10 days rendering all of the intricate details on her Wacom tablet.

“We go about our days rarely thinking of the beauty of the sun itself [since] we can’t look at it directly,” Machin explains. “When I saw the original photo by Dr. Sebastian Voltmer, I was awestruck by the intensity and the beauty of the corona. Streaming through space, those incredibly beautiful ribbons of energy bloom out from its surface in a display that is equally violent and also oddly serene.” So, she used Votmer’s image as a reference in her own digital rendering of the solar eclipse—spending numerous hours drawing the rocky texture of the moon and coloring the golden rays of the sun. As a result, the darkened moon looks as though it is framed by flames.

Director of Manchester School of Samba at http://www.sambaman.org.uk
View all posts by agogo22 →
This entry was posted in Art and tagged Art, Astronomy, creatives, technology. Bookmark the permalink.