We attended the trial of the Colston four: here’s why their acquittal should be celebrated | The Conversation 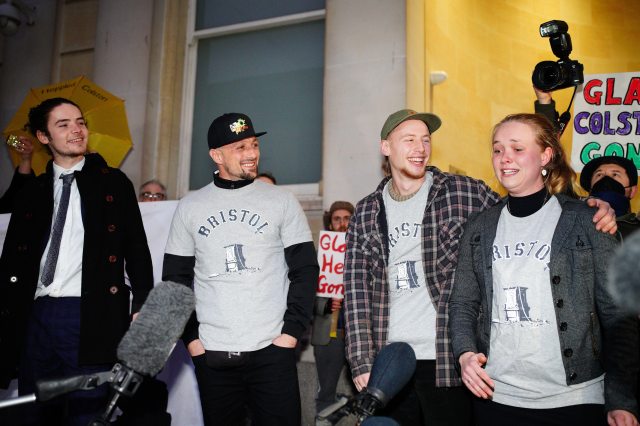 The acquittal of the Colston Four is an important moment in upholding the right to protest, precisely because the jury’s verdict was based on the law as well as sentiment.

The acquittal by a jury of four people at Bristol Crown Court this week for their role in pulling down the statue of Edward Colston and dumping it in the docks has been greeted with a chorus of outrage by members of parliament. Former cabinet minister Robert Jenrick implied in a tweet that the ruling somehow undermined the rule of law.

We attended all ten days of the trial from the public gallery. While we cannot know the jury’s reasoning, it is unlikely that this was a “perverse” verdict – where the jury believes the defendants are guilty in law but still choose to acquit. In this case, the judge gave the jury a range of legal reasons to acquit the defendants.

The trials of protestors are rarely like “ordinary” criminal trials. In most trials, defendants contest the facts of the case: what happened, whether it was them, if they were there, and so on. In protest trials, defendants focus instead on justifying their actions. Invariably, this explicitly brings politics into the court.

The “Colston Four” were charged with criminal damage. Under the Criminal Damage Act 1971, defendants charged with destroying or harming property can argue they had a “lawful excuse” for their actions. This is because safeguarding property – whether it is a house, a car or the statue of a slave trader – is less important than protecting public safety or preventing a more serious crime. To demonstrate “lawful excuse”, defendants must show that they acted reasonably and they honestly believed they were acting for these reasons.

All four of the accused accepted leading roles in the events of June 7 2020. As around 3,000 people congregated near Colston’s statue during a Black Lives Matter march, two of the defendants produced ropes. Another secured them around Colston’s neck. Once the statue had been pulled to the ground, the fourth defendant encouraged others to roll it to the docks, across the cobbles where (as he said in the witness box) so many had been dragged against their will centuries before.

Video of what the defendants did was repeatedly shown to the court. The jury could have little doubt about the “facts” of the case.

But the defendants denied their actions were criminal damage. They and their lawyers put forward three legally available reasons for this.

One of the key arguments was that the group was acting to prevent the more serious crime of public indecency. Though the prosecution insisted at the start of the trial that the only people in the dock were the defendants, this rarely felt the case.

Instead, it was Edward Colston and Bristol City Council that appeared to be on trial. The defendants and multiple witnesses argued that Colston’s crimes were so horrific that the continued presence of his statue was offensive, abusive and distressing. The local council’s failure to remove it, despite 30 years of petitions and demands from Bristol’s African-Caribbean community, in particular, amounted to misconduct in public office.

The judge, HHJ Peter Blair QC, didn’t allow jurors to decide on the grounds of misconduct because there was insufficient evidence on the matter. But he did allow them to consider whether the statue was offensive. One defendant said in court that the statue was “offensive to the true character of Bristol… [it is] wrong to celebrate an individual who had such crimes against humanity in such a multicultural city”.

The defendants also demonstrated that they genuinely believed the citizens of Bristol were the owners of the statue and would consent, including by highlighting that the plaque on the plinth of the statue stated that it was “erected by citizens of Bristol”. And as evidence that the defendants truly believed local citizens would support their actions, they noted the many petitions that had been sent to the council calling for the statue’s removal. The prosecution argued that the very fact that these petitions were addressed to the council implied that the council was the owner.[…]

Continue reading: We attended the trial of the Colston four: here’s why their acquittal should be celebrated

Director of Manchester School of Samba at http://www.sambaman.org.uk
View all posts by agogo22 →
This entry was posted in History and tagged history, Justice, Politics. Bookmark the permalink.

1 Response to We attended the trial of the Colston four: here’s why their acquittal should be celebrated | The Conversation