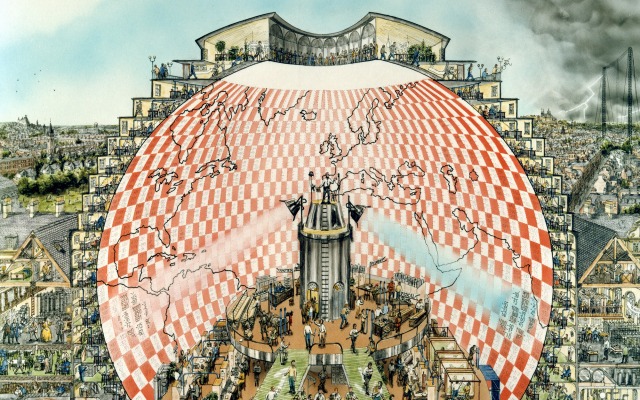 How did the planet replace the nation-state to become the prime political object of the 21st century?

Imagine a vast circular chamber, with walls covered in a towering painted map of planet Earth. Picture this hall ‘like a theatre, except that the circles and galleries go right round through the space usually occupied by the stage’. Enormous rings of tiered seating circle its outer walls. Imagine that working in these seats are 64,000 ‘computers’ – humans doing calculations – each preparing a different weather forecast for their designated geography. And in the middle of the hall, on a large pulpit at the top of a tall multistorey pillar, stands the ‘man in charge’, who coordinates the scattered weather calculations from his computers into a global forecast like a ‘conductor of an orchestra’.

This ‘forecast factory’ was the dream of the 20th-century English mathematician and meteorologist Lewis Fry Richardson. Following hundreds of pages of equations, velocities and data in his prosaically titled bookWeather Prediction by Numerical Process (1922), he asks the reader to indulge him: ‘After so much hard reasoning, may one play with a fantasy?’ For Richardson, one of the main limitations on weather forecasting was a lack of computational capacity. But through the fantasy he could ignore practical problems and bring an entire planet into focus. His ‘factory’ saw once-scattered local observations merging into a coherent planetary system: calculable, predictable, overseen and singular.

Richardson died in 1953, the year IBM released the first mass-produced electronic computer. Though his factory never materialised exactly as he imagined it, his dream of a calculable planet now seems prophetic. By the 1960s, numerical calculation of global weather conditions had become a standardised way of recording changes in the atmosphere. Clouds and numbers seemed to crowd the sky. Since the 1960s, the scope of what Richardson called weather prediction has expanded dramatically: climate models now stretch into the deep past and future, encompassing the entirety of the Earth system rather than just the atmosphere. What is startling about this is not that our technical abilities have exceeded Richardson’s wildest dreams but the unexpected repercussions of the modern ‘forecast factory’. The calculable, predictable, overseen and singular Earth has revealed not only aeons of global weather, but a new kind of planet – and, with it, a new mode of governance.

The planet, I argue, has appeared as a new kind of political object. I’m not talking about the Sun-orbiting body of the Copernican revolution, or the body that the first astronauts looked back upon in the 1960s: Buckminster Fuller’s ‘Spaceship Earth’, or Carl Sagan’s ‘lonely speck’. Those are the planets of the past millennium. I’m talking about the ‘planet’ inside ‘planetary crisis’: a planet that emerges from the realisation that anthropogenic impacts are not isolated to particular areas, but integrated parts of a complex web of intersecting processes that unfold over vastly disparate timescales and across different geographies. This is the planet of the Anthropocene, of our ‘planetary emergency’ as the UN secretary-general António Guterres called it in 2020. The so-called planetary turn marks a new way of thinking about our relationship to the environment. It also signals the emergence of a distinct governable object, which suggests that the prime political object of the 21st century is no longer the state, it’s the planet.

For those closely following contemporary environmental science and politics, this is nothing new. The need to stay within the boundaries of the planet became a flashpoint in the 1970s after the Club of Rome published its report The Limits to Growth (1972). The report suggested that unlimited economic growth on a planet with finite resources would prove unsustainable in the long term. Since then, rather than ‘limits’, the crucial framework for global environmental governance has become ‘planetary boundaries’, a term coined in 2009 by the Swedish scientist Johan Rockström and a team of researchers. This change is emblematic of how global, social, economic and technological relations have become conflated with the physical properties of the planet itself.

Modelling the outcome of the entangled and rapidly declining relationship between humans and Earth has become a key task for scientists across a range of fields, which has led to a blurring of scientific and political futures. The closer this relationship gets, the harder it becomes to disentangle the two from each other. For someone like myself, born in the mid-1990s, models of planetary conditions have almost become images of the future itself. The planet is suddenly everywhere. Planning, designing, research, strategising – even the grounds for thinking itself – are now adjusted to the planetary scale. As this scale becomes ubiquitous, it can sometimes be difficult to see that this form of the planet has a history of its own. If the planet just recently resurfaced as a new kind of environmental category, where did it come from?

The recently resurfaced planet, I argue, can be traced back to fantasies like Richardson’s. Contemporary planetary governance relies on a specific trajectory of planetary monitoring. Even though efforts to map and measure global space have a far longer history – not least as a primary vehicle of Western colonialism and imperialism – the efforts to monitor and governplanetary dynamics have also relied on a particular history of knowing, seeing and measuring the planet. Thinking of the planet as an interconnectedsystem required quantified and centralised approaches as well as a wide set of scientific instruments and technologies. A specific kind of planet was able to emerge, not by itself, but through the interconnected histories of geopolitics, technology and grand visions of planetary monitoring. […]

Continue reading: How the planet became the prime political entity of our century | Aeon Essays

Director of Manchester School of Samba at http://www.sambaman.org.uk
View all posts by agogo22 →
This entry was posted in Meterology and tagged construction, Environment, science. Bookmark the permalink.