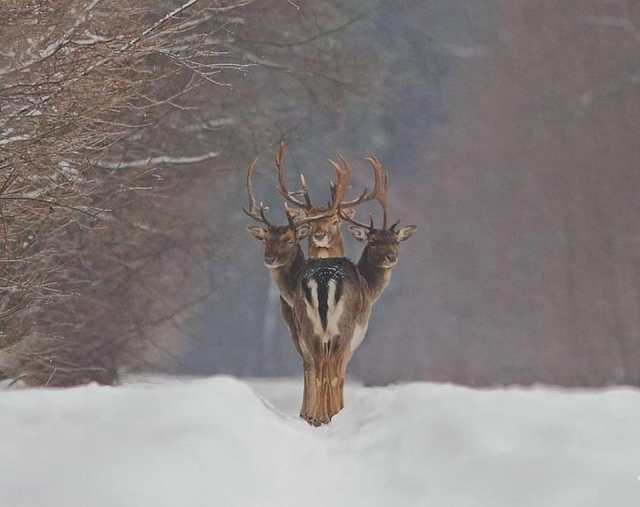 “I was lucky to get them all looking at the camera all at once before they disappeared.”

At first glance, photographer Renatas Jakaitis appears to have captured something straight out of science fiction. Three deer heads seemingly sprout from one body as they peer at you from the snowy surroundings. This isn’t the  work of Photoshop; however, it’s all an optical illusion. The three-headed deer doesn’t exist, but it’s moments like this in photography that capture the imagination.

Getting an incredible shot like this one is often about being in the right place at the right time. To capture this image, Jakaitis was walking behind the deer in the forests of Lithuania, snapping photos along the way. The sound of the camera shutter caused the animals, who were walking one after the other, to turn their heads all at the same time and produce this mind-bending image.

It’s incredible luck to capture a photo like this, and fortune was certainly on Jakaitis’ side. “I think my camera shutter gave me away, as they quickly looked up when I started capturing them,” he said at the time. “I was lucky to get them all looking at the camera all at once before they disappeared, they all ran away when they saw me! They must have been camera shy.” […]

Director of Manchester School of Samba at http://www.sambaman.org.uk
View all posts by agogo22 →
This entry was posted in Photography and tagged Art, nature, photography. Bookmark the permalink.