Due to physical and societal constraints, the typical sleep patterns of humans are largely fixated. For cats, however, there is a certain randomness to their sleep–sometimes under the bed, other times in the hallway–that is simply impractical for humans. But what if we as humans replicated the sleep habits of cats? What effect would that have on the quality of our sleep? That was the starting point of an intriguing dissertation, published recently by Yuri Nakahashi, a students of Japan’s Hosei University.

Cats will sleep in a variety of different locations, each likely the combination of factors such as mood, warmth, light and coziness. If humans were to imitate these patterns, what effect would that have on their quality of sleep? Researcher Yuri Nakahashi attempted to measure and quantify the physical and mental effects this would have on humans by monitoring her 5 cats and allowing each to choose her location of slumber.

Once the cat had appeared to curl up for evening, Nakahashi would lay down a sleeping bag in the same spot, a determination that sometimes resulted in sleeping under a bed or along the stairs. The experiment was conducted for 24 consecutive nights.

The researcher wore a Fitbit while sleeping, which measured hours and quality of sleep, as well as the number of times she woke up. The quantitative score, graphed below, was then complimented with a qualitative assessment of how the researcher felt physically and mentally compared to sleeping in a normal bed. Any behavioral differences of the cat were also noted and recorded. 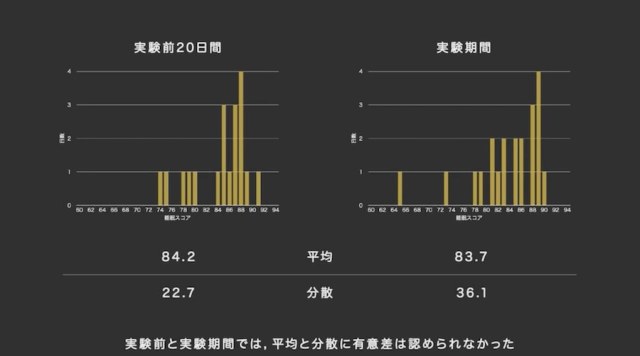 Director of Manchester School of Samba at http://www.sambaman.org.uk
View all posts by agogo22 →
This entry was posted in health and tagged design, Environment, Life. Bookmark the permalink.