Winners of the 2022 Comedy Wildlife Photography Awards | My Modern Met

“Not so cat-like reflexes” by Jennifer Hadley (United States). Overall Winner and Alex Walker’s Serian Creatures of the Land Award.
Location: Serengeti Tanzania
“This 3-month-old cub and his sibling were in a tree. The other lionesses were in other trees and on the ground. He wanted to get down and walked all over the branches looking for the right spot and finally just went for it. It was probably his first time in a tree and his descent didn’t go so well. He was just fine though after landing on the ground. He got up and ran off with some other cubs.”

If you need a reason to smile today, here you go.

The winners of the 2022 Comedy Wildlife Photography Awards have been announced and the images are as delightful as you might expect. American wildlife photographer Jennifer Hadley was named the overall winner for her charming look at a lion cub making a clumsy attempt to get down from a tree. For her efforts, she’ll receive a once-in-a-lifetime safari in Kenya’s Masai Mara.

Hadley was thrilled that her photo, which beat out 5,000 other images from 85 countries, won the contest. “I think part of what makes this contest great is that most of these photos probably happen by complete accident and that was certainly the case with the lion cub falling out of the tree,” she shares. “It was very late in the afternoon and so I had my aperture as open as possible to capture the most light possible with my shutter down lower than I would have liked but I figured with the cub walking around in the tree, I didn’t really need the speed. It didn’t even occur to me that he would make a go of getting down by himself in the most un-cat like fashion.” 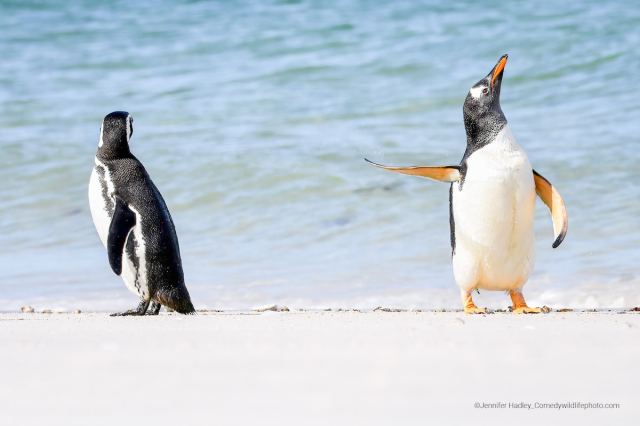 “Talk To The Fin!” by Jennifer Hadley (United States). Affinity Photo 2 People’s Choice Award.
Location: Falkland Islands
“This was shot on the Falkland Islands. These two gentoo penguins were hanging out on the beach when one shook himself off and gave his mate the snub.”

But winning the top prize wasn’t Hadley’s only award. She was also named the Affinity 2 Photo People’s Choice winner for her charming photo of two gentoo penguins. Taken on a beach in the Falkland Islands, Hadley’s photo shows one penguin seeming to tell its friends to move along with a classic “talk to the hand” motion.

“I’m so excited and honored to be named as the overall winner and the People’s Choice as well,” Hadley admits. “Honestly, when I saw all the finalists come out, I was just happy to be among them but I never expected to win. There were so many amazing and funny animal photos in the group, and I had such a laugh looking through them. I really love this photo contest because it’s just so different from anything else and really shows off the personalities of the animals plus it helps raise awareness of various wildlife and funds conservation efforts so it’s just really awesome to be a part of this” […]

“Pegasus, the flying horse” by Jagdeep Rajput (India). Highly Commended.
Location: Keoladeo National Park, India.
“Actually this is Indian Saras Crane attacking a Bluebull from behind, the bull happened to venture close to Saras’s nest, where in, it had laid a single egg. The Saras Crane, which is tallest flying bird in the world, opened its huge wings and attacked the bull from behind, driving the bull away from the nest.
Animal: Bluebull and Indian saras Crane.”

Director of Manchester School of Samba at http://www.sambaman.org.uk
View all posts by agogo22 →
This entry was posted in Photography and tagged Art, nature, Technology. Bookmark the permalink.