This is a story about how to perceive the population of cities.

From my perspective (albeit a US-centric one), it was eye-opening to see how the world’s population is so unevenly distributed. For example, compare the West Coast of the United States to Java, an island in Indonesia (home to 140 million people). 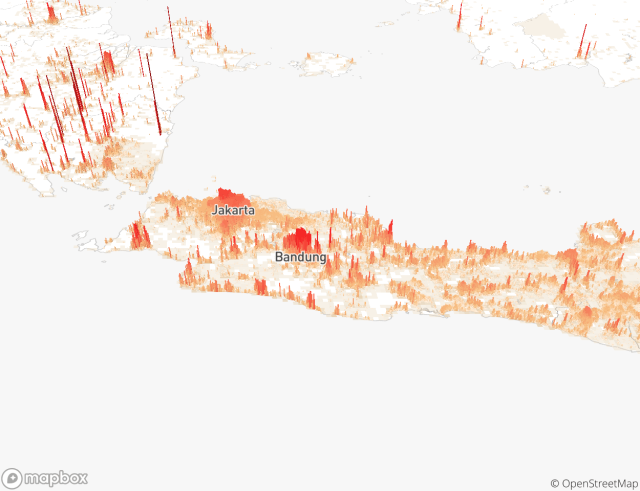 What stands out is each city’s form, a unique mountain that might be like the steep peaks of lower Manhattan or the sprawling hills of suburban Atlanta. When I first saw a city in 3D, I had a feel for its population size that I had never experienced before.

That feeling goes a long way to improve my own geographic instincts. In 1993, there were 14 cities with over 10 million people. Today, 20 additional cities qualify (and another 11 will by 2030), with many sprouting from farmland in our lifetimes. Unless you’ve visited one of these new cities of 10 million people or tracked its growth closely, its scale can be hard to envision.

Among them is Kinshasa, Democratic Republic of Congo (13.1 million people), which I now know to be bigger than historically populous cities (see my article on Kinshasa’s airports vs. other cities’). I saw it outrank Paris (11 million people) in population bar charts and data tables. Yet it wasn’t until I saw the population as a form, rather than a number, that I could appreciate how large Kinshasa had become.

The 3D view left me with a better understanding of the world’s center of “human” mass, especially the weight of Africa and Asia. First, let’s tour a few cities, giving you a sense of what 10 million people “looks like.”

Director of Manchester School of Samba at http://www.sambaman.org.uk
View all posts by agogo22 →
This entry was posted in Maps and tagged Art, comparison, design, history, Metropolis. Bookmark the permalink.