Launched in Detroit This Summer, A Black-Led Mural Festival Wants to Revitalize Neighborhoods with Public Art

Murals have long been associated with placemaking because of their unparalleled ability to transform underutilized corridors and city stretches into spaces primed for cultural gatherings, tourism, and subsequently, economic growth. This revitalizing potential is what drives a biannual festival that launched in Detroit earlier this summer as it dramatically altered the urban landscape of the city’s central North End neighborhood.

Back in July, BLKOUT Walls saw the work of 19 muralists produced across the area, which was once regarded as an entertainment hub that produced famed Motown talents like including Smokey Robinson, Diana Ross, the Four Tops, and Aretha Franklin. Participating were visiting artists like Sentrock (previously) and Detroit natives like Tylonn J. Sawyer, Bakpak Durden, and Sydney James, who co-founded the festival with Chicago’s Max Sansing (previously) and Thomas Evans, aka Detour 303. 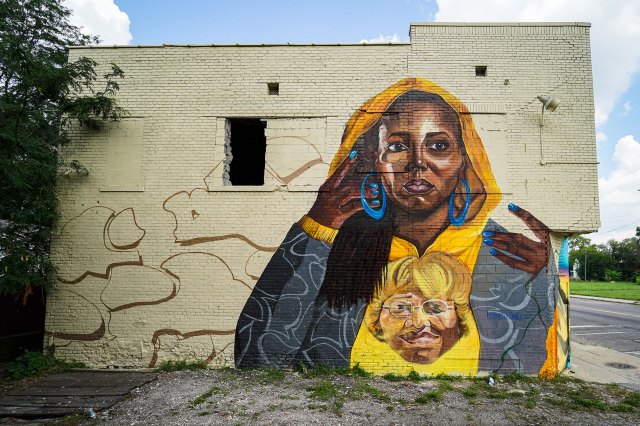 The resulting works span a range of themes and styles from Sansing’s sprawling technicolor creations to Tony Whgln’s whimsical botanicals to James’s contemporary twist on “Girl with the Pearl Earring,” which turns the iconic Vermeer into a subversive portrait of artist Halima Cassells. Swapping the white gem for a large “D” and cloaking her garment in patches, James’s revision is an homage to Detroit and its people.[…]

Director of Manchester School of Samba at http://www.sambaman.org.uk
View all posts by agogo22 →
This entry was posted in street art and tagged Art, creatives, design, Environment, street art. Bookmark the permalink.