True love lies beyond the claustrophobia of romance | Aeon Essays 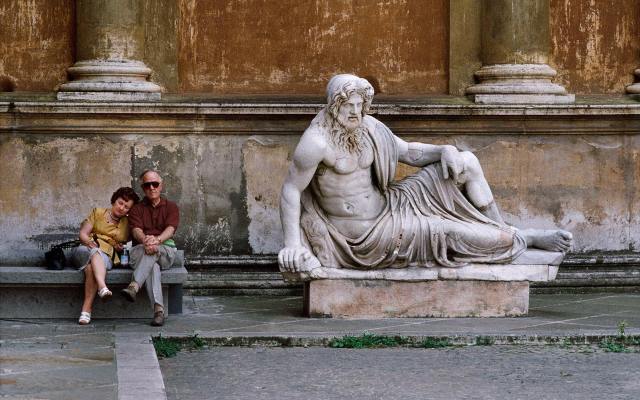 Forget the modern romantic notion of ‘the one’. True love means looking beyond the couple and out towards life

It is a telling statistic that the ­most frequently ‘what is…?’ question typed into Google last year was: what is love? This fact probably reveals more about the society that asks an internet search engine such a thing, than any answer reveals about the nature of love. But if not Google, then where else can we look to understand love? The fantasy-making machines of Hollywood and Bollywood insist that there is only one answer worth indulging: the romantic kind. Most people, it would seem, agree, if only by default. They are dragged into seeking the person who will make them ‘whole’ via a dating website, or by a less tangible, though no less keenly felt urge cultivated by the same, dominant culture that insists we must find ‘the one’. Not that its origins are modern. Ever since the poet Sappho wrote, in the seventh century BCE, of love rippling under her skin like wind through trees, romantic love has been imagined as irresistible, a crucial experience that marks the peak of human existence.

Yet, the Google stats suggest that there is also a silent global search underway — many of us are clearly not satisfied with romance as an answer. The real problem, then, might be that contemporary culture leaves us unprepared for thinking about love in anything other than a one-dimensional mode. Just as marriage has seized the monopoly on public affirmations of love, so a notion of romance has restricted what we can imagine as a loving relationship.

The ancient Greeks, unlike us, did not have a single word for love but many. As is often noted, they had philia (friendship) and eros (desire), storge(affection) and agape (unconditional love). Perhaps that is another part of our problem. Our language invites us to think of love as a single, unified thing, when it is nothing of the sort. I suspect that words are not enough to address this modern deficiency. What we need is a new sense of the variety of love’s experiences. Fortunately there is another storehouse we can draw on from our ancient forebears: and it is not their words, but their myths that can enlighten us.

In a sense, we are lumbered with the dominance of romantic love; it can’t simply be sidestepped in favour of friendship, for example. That would never work: the erotic is simply too powerful. But the ancient myths can help us realise why romance is such a successful sell, if short-lived. Perhaps the myth that best captures the allure of romance is Aristophanes’ idea about soulmates, from Plato’s Symposium The story goes that human beings originally had two heads, four arms and four legs. We were shaped like round balls and tumbled across the face of the Earth at great speed. The gods grew alarmed at this display of power. So Zeus hatched a plan. He would cut human beings in half, leaving each with just one head, two arms and two legs.

These mutilated halflings were a pathetic sight. In particular, they developed the habit of devoting considerable amounts of their now limited energy searching for their lost halves. The desire to find the missing other was irresistible. Individuals sustained the search in spite of repeated break-ups and romantic disasters in the indefatigable belief that the right person — ‘the one’ — was out there. The promise of love, they felt, was nothing less than wholeness.

The myth has had a long life, accurately describing to this day the inner experience of those who feel life is incomplete without such love. In fact, it wasn’t until the 18th century that Aristophanes’ way of thinking about love reached its logical conclusion, when Jean-Jacques Rousseau wrote of how he fell in love as a young man. Only after that experience, he mused, could he be sure that he had genuinely lived. The upshot was that romantic love had become the goal in its own right. It matters not who you fall in love with, so long as you have fallen in love. The experiential ideal usurps the complex personal reality. That is why romance has us so much in its grip and empties us out in the process. It is the same with the dogmatic pursuit of happiness.

Crucially, however, Plato’s original myth about soulmates ends not with an elusive, illusory happiness, but with a twist. And here it might have something to teach us, suggesting an escape hatch out of the romantic stronghold. Zeus takes pity on the halved humans. He moves their genitals round so that when they meet they can embrace and find a little release for their passion. Sex is a temporary taste of unity, and it helps, though only to a degree. So when Hephaestus, the god of craftsmen, passes by and promises the couples a wish, these tragic figures speak with one voice. Weld us together, they cry: melt us one into the other!

For love to have a future, couples need to be able to move from falling in love to standing in love

Hephaestus obliges. The two become one. And the new situation reveals another way in which love gets stuck. Glued together, gazing only into each other’s eyes, the lovers lose touch with the rest of life. Not caring for anything else, death takes on an attractive hue, and they dream of sharing a last single breath together — a fantasy that lives on in the French euphemism, la petite mort, and in the romantic climax to Romeo and Juliet. But as the psychologist Erich Fromm put it in The Art of Loving (1956), for love to have a future, couples need to be able to move from falling in love to standing in love. Lovers must learn to embrace what lies outside their cosy twosome in order to survive. As Freud made explicit, dyadic love can be nurturing, but can equally be claustrophobic and alienating, and Aristophanes’ tale suggest it must be transcended.

Mark Vernonis a psychotherapist and writer, and works with the research group Perspectiva. He has a PhD in ancient Greek philosophy, and degrees in theology and physics. He is the author of A Secret History of Christianity: Jesus, the Last Inkling, and the Evolution of Consciousness (2019) and Dante’s Divine Comedy: A Guide for the Spiritual Journey (forthcoming, September 2021). He lives in London.

Director of Manchester School of Samba at http://www.sambaman.org.uk
View all posts by agogo22 →
This entry was posted in Literature and tagged Art, creatives, history, Life, philosophy. Bookmark the permalink.